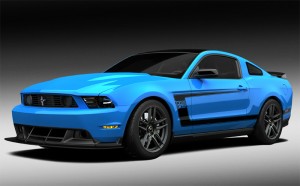 Tonight at the 40th Anniversary Barrett-Jackson Scottsdale Collector Car Auction event in Scottsdale, Mustang history was once made again. The one of a kind Grabber Blue 2012 BOSS 302 Laguna Seca edition sold for $450,000. Ford has offered up a number of special, early production or one-of-a-kind cars in the past few years for charity auction sales that have made headlines around the globe. This year the one-of-a-kind factory-painted Grabber Blue 2012 Ford Mustang Boss 302 Laguna Seca  sold to the highest bidder with none other than racing great Parnelli Jones providing commentary from the auction stage with Ford’s Mustang team. Jones won the 1970 Trans-Am season opener in a Boss 302 and the Laguna Seca is named after the track where he won that race.

While many might have been disappointed that Grabber Blue was not on the option sheet for the new BOSS 302 Laguna Seca edition, one lucky and well heeled buyer takes this one home, their money over MSRP going to the Juvenile Diabetes Research Fund. JDRF has been a benefactor of a number of Ford and Ford Racing auctions in the past few years.

“Like the legendary Parnelli Jones, the Boss Mustang we will be auctioning is truly one-of-a-kind. It is the only 2012 Grabber Blue Boss 302 Laguna Seca we will ever build,” said Ford’s Mark Fields. “The winning bidder on this car will not only become part of Mustang history but also will be a pioneer in the next chapter of the Boss legacy. At the same time, he or she will be contributing to a worthy cause, the Juvenile Diabetes Research Foundation.”

This Boss 302 Laguna Seca – a one-of-one production unit – was built specifically for auction at Barrett-Jackson. In addition to the unique Grabber Blue body colour, it features distinctive black accents on the roof, mirrors and spoiler, special wheels and C-Stripe, Recaro seats with Grabber Blue seat embroidery and Rear X-Brace, and a Grabber Blue grille surround. “With its combination of hot styling and serious performance, Ford’s Boss Mustang has always been at the top of the list for collectors,” said Steve Davis, president of Barrett-Jackson Company. “Since this Boss Mustang has a very low production number and specially built for our 40th anniversary event, the new owner will have a special piece of performance history for their collection. It’s a rare opportunity to support charity while taking home a very desirable modern collectible car.”