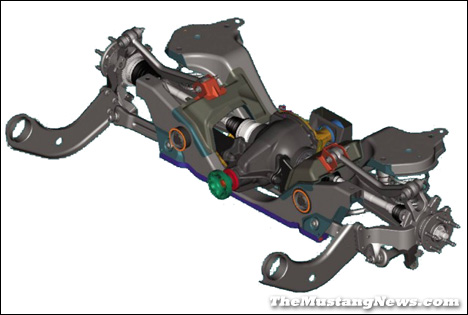 05-02-08: Having just spent some time driving the new Shelby GT-500KR which is arguably the highest performance Mustang Ford has ever offered with a warranty, the question still lingers. Should the Mustang have a modern Independent Rear Suspension (IRS)? For many, it’s hard to imagine that in 2008 we have a Mustang with an MSRP of $80,000 that still has a live rear axle.

People who have a broad-based enthusiasm for cars, that is to say those who appreciate many brands and models tend to be incredulous that Ford continues to use a live axle in their halo performance car. This is especially acute when you consider the price tag and horsepower of the top Mustang models today. Drag-racers and some Mustang purists are adamant that IRS is the devil and that changing over from a live axle will be the end of the world for Mustang. Engineers say it’s a huge compromise to consider because IRS is heavy, expensive and not as durable.

They are all right in their own way. It made me think it was time to expand on this a bit and explore each angle of this because the question rages on. The debate about IRS in the Mustang has been floating around since the late 1980’s. Each successive generation of Mustang has been rumoured to have an IRS but has shown up to market without it.

In 1999 SVT answered this desire in the Cobra Mustang. Because the SVT engineers could not alter the floor pan sheet-metal, the IRS system installed in the Cobra was a “bolt-in” assembly that used the same mounting points as the standard live axle. This made for an easier production installation but compromised the design because the length, geometry, and tuning of the suspension was dependent on the confines of a sub-frame cage that was not flexible in design.

Drag racers hated it because of unrecoverable axle-hop. Road racers liked it when the bearings weren’t coming apart or the bushings weren‘t wearing thin. Daily drivers found their bliss in a great ride and superior handling dynamics on real world roads which unlike race tracks, have bumps, potholes, and pavement seams. The triad of users are still with us today and are still the lobbyists of the argument for and against IRS.

The 2005 (S197) Mustang had been expected by many to have IRS since it was derived from the DEW98 chassis which underpinned the Ford Thunderbird, Lincoln LS, and Jaguar S-Type. The world class chassis had both a superior Short/Long-Arm (SLA) front suspension and a fully independent rear suspension. But as time went on, the new Mustang chassis evolved to a unique hybrid of the DEW98 that not only had a live rear axle but a McPherson strut front suspension.

The reasoning given for the de-contenting was all about keeping Mustang at an affordable price-point. At the time Ford said that IRS would have cost an additional $500 per car. Because the Mustang is meant to be a mass-market leader with a sub-$20,000 entry point that’s the choice that was made. But given the many benefits of a modern chassis, wouldn’t most people pay an extra $500? On the average car loan that translates to about $8-9 per month in payment increase. Let’s have a look at the argument for and against and you can decide.

The Argument For IRS:

• Marketing: It’s the modern and mainstream format for all other rear-wheel drive sports cars and sedans – and now the Camaro and Challenger. Today the Mustang is widely beaten down by the motoring press and consumer publications for being “old fashioned“. Lack of an IRS could be hurting Mustang’s mass appeal regardless of whether or not it would actually improve the car.

• Handling & Safety: Independent rear suspension allows each wheel to react individually to bumps, undulations, and traction variations without affecting the other. Because one wheel is not affecting the geometry or stability of the other, rear axle skate and mambo dance on washboard surfaces is eliminated. This translates into increased stability, increased refinement, and better overall traction in day to day driving.

• Less Un-Sprung Weight: Without the weight of a live axle and differential assembly directly on the wheels, suspension tuners can concentrate on traction, road feel, and cornering poise. With a live axle they have to compromise those settings to also control the dead weight of the axle. Less un-sprung weight always translates to better predictability, less harshness, and better traction on rough surfaces.

• Better Front/Rear Balance: An IRS system almost always weighs significantly more than a live axle, but it’s “sprung weight“. While the extra pounds are a bummer there is an upshot. That increased weight is at the rear of the car which can help bring a balance to the traditionally nose-heavy Mustang. By changing the front/rear weight balance from the current 55/45 to perhaps 50/50 would move the centre of rotational gravity to the middle of the car which can vastly improve handling balance. 50/50 is a lofty goal, but wouldn’t that be nice in a Mustang?

The Argument For Live Axle:

• Simplicity: The live axle is the least expensive and easiest format to manufacture. It has the fewest parts and requires little research and development going forward.

• Durability: They don’t break. For high power applications those thick axles and stout housings can take all the power. IRS systems typically have more complexity and more delicate parts like multiple CV joints, bushings, and bearings that can be failure or wear points.

• Racing Bliss: Drag racers and road racers alike favor the live axle because it gives them tried and true traction. On the 1/4 mile straights, the stick is easy to tune for maximum launch and is not prone to wheel hop with today‘s set-ups. For road racers, its simplicity allows for easier tuning. Panhard bars and Watts linkages both arrest lateral motions and offer track specific tuning opportunities at the twist of one nut or bolt.

• Easily Modified: For the racer or the mod-artist there are thousands of off-the-shelf parts on the market that allow easy gear changes, strength build ups, and suspension tuning. A new IRS would mean a long lead time for aftermarket parts to become available.

The struggle is simply this. Live axle be-damned the Mustang still sells even at $80,000+ for high-end Shelbys and Saleens like the S281E. So why spend the money and add the weight if it still sells? On the other side of that is the mass market appeal. Why not improve the breed to make the car more appealing to the non-Mustang faithful?

There is a new crop of buyers entering the market who idolise technically complex import cars like the Nissan GT-R, Lexus IS, Subaru Imprezza WRX, Mitsubishi Eclipse and so on. For many it’s the technological prowess of these cars that make them exciting to buyers. Why not bring the Mustang’s technology inline with these modern contemporaries so these buyers would be more likely to add it to their shopping lists, thereby increasing market share?

But in my recent bullring conversation when the last sentiment was offered one well known Mustang auto writer vehemently countered, “The Mustang is not a (BMW) M3! It’s not meant to be!” And while I tend to think that when a Mustang costs $80,000 perhaps it should be, I thought he had a point. So on we go. Ford has been struggling with this for some time now and most Ford engineers I talk to would rather change the subject. They have been down this road before and will continue on it for time to come.