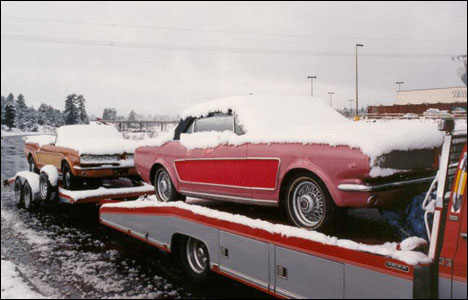 12-03-08: News has been out this week that the Sonny & Cher Mustangs are going on the block next February at the RM Collector Car Auction in Ft. Lauderdale, FL .The pair of matched ‘66 convertibles built by custom car king George Barris are a piece of Mustang history indeed. Pink, orange, gold, furry seats, and vinyl exterior trim – they are wild and over the top. They are iconic of the 1960’s era of stylish excess in the custom car scene.

It got me to thinking about the time I had spent with their previous owner, the late Don Chambers. Don was the owner of Mustang Country, a long time Mustang parts mercantile in Paramount, CA. The first store on Lakewood Blvd was a small old shack of a place with a fenced in junkyard of sorts. It was gritty, crowded and smelled like a repair shop. He always had classic Mustangs in various degrees of completion cluttered around in front, in back and in the showroom.

The man was a larger than life character that had a sort of John Wayne cowboy way about him. He was a friendly and talkative guy if he really liked you, quieter at first if he did not know you. His business sense was keen in many ways. He once showed me one of his catalogs which was one of the first to use photos for almost every part. “A lot of the guys who come in here don’t speak very good English”, he said. “They can point to the pictures and show me what they need for their cars”.

More importantly Don had one of what could be the most valuable if not eclectic Mustang collections anywhere. In addition to the Sonny and Cher Mustangs, he had the 1968 GTE-500 experimental coupe that is also up for auction early next year. There was the 1965 Frank Sinatra Mustang which was also built by Barris. Like the Sonny and Cher cars, it had furry and colourful interior trappings that made you think of dropping some acid just sitting in it.

Later in the 1990’s, Wal-Mart came along and bought the corner where the original Mustang Country stood and Don opened up a brand new shop right next-door. The new store was huge and now had a large warehouse to house his growing collection of the rarest of Mustangs and Fords. It was a beautiful thing.

By then he had what seemed to be 100 cars in the back that included vintage race cars of fame, concept cars, movie cars, and some of the rarest Mustang models ever. That collection at its peak had to be worth millions. He had a way of finding them. He knew a lot of Hollywood studio types and came into cars through those channels. Through his business, he also acquired many as well.

But let’s get back to the Sonny and Cher cars. In 1994 when I organised the first Mustangs Across America event Don brought those two cars along for the transcontinental journey with us. He had a custom painted car hauler to match the cars and they made the journey from Los Angeles to Charlotte, NC for the Mustang 30th Anniversary Celebration.

In Flagstaff we hit a terrible blizzard which nearly brought the 100+ Mustangs to a halt. Don was bringing up the rear and being a veteran of the road had no problem driving in the snow. When we all got to the hotel that night it was discovered that one of the custom grilles from the Sonny Mustang had been broken out by the wind and snow. People oohed and ahhed asking, “What are you going to do?”

Don just brushed it off and said it was an easy fix. A couple days later we stopped in Little Rock, AR for the night. As we milled around the hotel parking lot that evening Don was working with a new piece of plastic grille material carefully cutting it to fit. It seems that the Sonny and Cher cars used the exact same plastic diffuser grid commonly found in office ceiling light fixtures. He had stopped by K-Mart and picked up a new one. That makes me smile every time I think of it. Don Chambers passing was a loss to our hobby. The last time I saw him was in 2002 at his shop. He had become terminally ill and had to retire. He had sold Mustang Country and was in the process of selling most of his collection when we visited. In his pain he was still as Don always was, proud and happy to take the time to show you his cars and tell you a story or two about them.

Sonny and Cher, George Barris and Don Chambers, all good company in the history of these two cars. 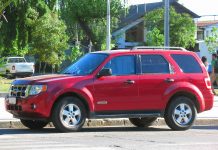 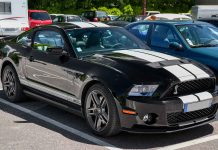 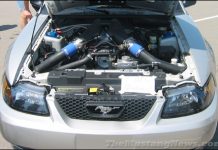