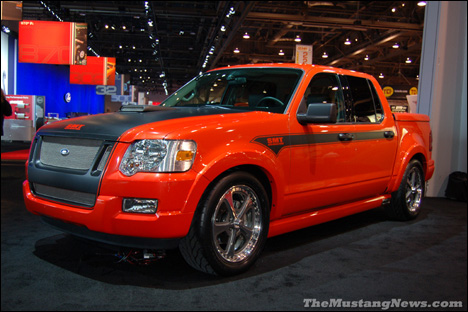 It wasn’t all about the Mustang. Several other show cars from Ford’s line made the grade.

11-17-06: The Ford pavilion at the 2006 SEMA Show had a lot of eye candy that well beyond the many Mustangs we have featured. Several custom vehicles showcasing Ford’s other vehicles and engines were on hand that stretched the imagination and pushed the envelope of style with new ideas and products. Every year custom builders and parts manufacturers are invited to build their own vision of what a Ford can be. Here are the highlights of this year’s crop.
SEMA 2006 Coverage: ►Back to SEMA Index

The “Oxblood” red Navigator by Galpin was a refreshing change of culture from the typical Bling Boxes festooned with truckloads of chrome crap that festered this year’s show. It was wild none the less with a custom leather interior with bright “Luxe Calf Cherry” hides and eye catching electric red maple burl wood throughout. The exterior was tastefully lined out with a set of body colour accent aluminium wheels. If an Explorer could be a Mach 1, this is what it would look like. Their take on the Sport-Trac was to create a “truck with the sensibility of a muscle-car”. Major features are the bright orange paint with black graphics and lowered suspension. A CDC Shaker hood scoop was retrofitted to round out the look. Inside, a number of key mods were done including a Sony Xplod stereo. Known for customising Mustangs, Steeda got in the game this year with a custom Ford Fusion. They performed a custom paint scheme and added their trademark wheels along with Steeda Graphics. The 3.0 litre V-6 was massaged with a prototype tuned Cold-Air intake system that might end up on shelves soon. There is no denying that orange was the colour of choice this year to get your attention. It photographs very well too. The most noticeable feature is the rally style lighting cluster mounted on the front bumper with Hella lamps. This was a notable feature on many show cars this year. Interior custom leather interior from Carnutz Customz was a sight to see. Of course there were a set of H&R springs underneath and a healthy set of wheels. This company is fast becoming known for their well designed and integrated looking body fitments. When it comes to good looking add-on body kits, the key is making them look like they weren’t added on. 3dCarbon has created such a package for the Ford Edge. The “California Crossover Seried” 8-piece kit enhances the look of the show car which is also lowered about 2”. Fit up with 22” wheels and a nice leather trim job by Katzkin interiors this Edge got lots of attention. Featuring the “Euro Series” body package, 3dCarbon also put together this class act of a Lincoln MKX. The show vehicle was lowered and included a Magnaflow custom exhaust system. Notice the 3dCarbon fender vents, the latest trend. The look is completed with a stylish set of 22” wheels from NC. The people at 3dCarbon were busy this fall. They also showed off their take on the Lincoln MKZ with their “Euro Styling Package” for this model. Their package is complete with an air dam, side skirts, rear lower skirts and a deck lid spoiler. Also shown on this MKZ was a unique stainless steel grill and roof panel. At first blush this thing looks like a dune buggy. Upon closer inspection however you will find a carefully crafted piece of art. This radical two-seat open wheel roadster showcases Ford’s new 3.5 litre V6 engine that will become the back-bone of their car line in the coming years. What is notable is that they have managed to install a Vortech supercharger on the new V6, which lends hope that this is a sign of things to come from Vortech. The eye catcher of course was the polished stainless steel tube chassis. Built by the people at Ford Racing to showcase some of their new goodies for the F-150, we have written about this truck before. The notable features are the Ford Racing supercharger which raises power to a whopping 450. From the visual standpoint, the GT-500 style wheels are a high point as well. Most all of the mods to this truck are likely coming to a Ford Racing parts dealer near you.