Smoke ’em if you got em: Muscle cars are dead. 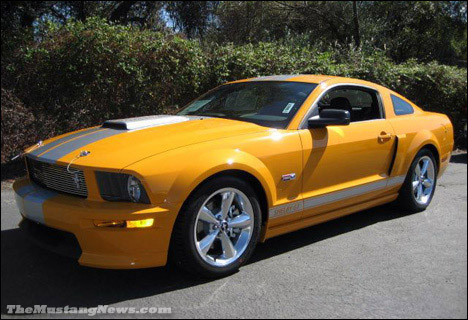 Enjoy your V8 Mustangs while they last. If you have one, hold on to it. If you plan on getting one, do it within the next couple of years because they will be going away. While automotive enthusiasts have been clamoring for a bigger BOSS V8 for the Mustang, more supercharged horsepower for the GT-500, and 4-door sedans of the same vein, the Democrat controlled Congress in Washington has been plotting against us.

This week both the House and Senate passed a landmark energy bill that should be named, “The 2007 Kill The American Automobile Industry Act”. In another strange departure from sound principles, President George Bush will actually sign the bill on Wednesday, casting a major blow to the automotive landscape as we know it.

Among many other things, the new bill brings about a new escalating Corporate Average Fuel Economy (CAFÉ) of 35 mpg by the year 2020. Starting in the year 2011, automakers will need to increase fleet wide fuel economy by 40 percent, up from the current 27.5 mpg CAFÉ requirement. If this were not devastating enough, the new standard will also for the first time include heavy trucks, work trucks, and large SUV’s into the mix.

In order to meet the new requirement of a 35 mpg fleet average across passenger cars, sports cars, SUV’s and trucks, a company like Ford will have to invest nearly 100% of their future energies and monies into fuel efficiency technology and new economy minded models. This means that the time and money for high performance cars like the Mustang will be gone. The will to build faster more powerful rear-wheel drive coupes and sedans will be gone.

To help one understand the concept of the CAFÉ, what it means is that the average fuel economy across every car the company builds has to be 35 mpg. This means that there have to be lots of cars that get well over 35 mpg to allow cars that get less than 35 mpg to exist. So, for every Mustang that only gets 20-25 mpg or F-150 that gets 15-20 mpg, there have to be a crap-load of cars on the 40-45mpg range to offset the difference. Never mind that there is no current V8 Mustang that can achieve 20-25 mpg.

At the moment Ford cant even build a car that averages 35 mpg, let alone sell them. The current Ford Focus which is a piece of crap that nobody wants is only rated at 35 mpg on the high end, not a combined city highway rating. For Ford to be able to offer even a 210 hp V6 Mustang such as the one currently rated at a dismal 16/24 mpg, let alone a gas sucking GT-500, they will have to sell three or four times as many economy cars that get 40, 50, or even 60 mpg to meet the new CAFÉ requirements. We haven’t even talked about the fact that Ford and most Detroit automakers make their bread and butter with full sized trucks that get an average of 14-17mpg.

The more you do the math, it hits home. It’s over. The party was fun while it lasted, but the future of the muscle-car, full sized SUV, and full sized trucks looks grim. The feeling is not unlike that of Sarah Connor in the movie Terminator 2, who was haunted by visions of a dark and bleak future after a nuclear war. Those scenes of destruction and blackness will be your local Ford, Chevy and Dodge dealers.

Fact is that the Detroit automakers are going to have to completely revamp every vehicle they build and rethink the automotive landscape as we know it today. No longer are they going to be able to pay the light bill with full sized pickups, SUV’s and even the new mid-sized cross-overs for that matter. Hybrids, diesels, flex fuel vehicles will help in meeting the new CAFÉ standards, but it wont be enough. They are going to have to drop the majority of their current models in favor of a new wave of smaller, less powerful and less safe econo-boxes much as they had to do in the late 1970’s and early 1980’s.

What is frightening for this grand enthusiast for American brands is that in all honesty, American car companies have never been all that good at building small cars that people like. Lets be honest, Ford’s Focus is a joke. The Chevy Cobalt still smells of the Cavalier which was junk, and Dodge has only had mediocre success with their new crop of small cars. American’s by-in-large don’t trust Detroit to build small cars. They prefer to look toward Honda, Toyota and other Asian brands.

American companies have to deal with the fact that the rug has been pulled out from under them in building the type of products that Americans do like to buy from them, namely trucks and SUV’s. Moreover, they have to climb the mountain of trust with the American public on small cars. It is a double blow to an industry that is already in a state of emergency. It is not out of the realm to suggest that one or two of the Detroit Three may not survive as a result of this new CAFÉ legislation.

So, why this? Why now? Well to quote Democratic Senator from California, Barbara Boxer, “Elections have consequences”. How hauntingly ironic a statement coming from her. All of you who thought you were smart by voting in a Democrat controlled House of Representatives and Senate can rejoice in your choice. You were warned that if these people were given power, they would carry out the agenda of the radicalized environmentalist movement.

This bill exists today because of the pressure put on politicians of all stripes by the wieght of the Great Global Warming Hoax, the wild-eyed notions of the Sierra Club, and the nattering anti-capitalist untertow of the environmentalist special interests who seemingly think we should all be living in grass huts and riding bycycles like the happy Chinese in third-world paradise.

Unfortunately, the once strong legislators on the right side of the isle from the “Contract With America” Gingrich era have lost their spines and caved in to the pressures as well. While the new bill is being heralded by the Left as a great deal for the earth, it will come at the cost of our country’s manufacturing complex, our choice as consumers, our economy and likely our safety on the roads.

The sad thing is that Republican President George Bush is also on board with this disastrous legislation. Unfortunately, he has an established track record of giving the American auto industry the cold shoulder, so this is right in line with his previous stances. Perhaps he has a false hope that it will help ease public perception that Republicans are obstructionists to environmental and progressive energy legislation in the coming election year. In any case, the one person who could have been our last hope to stop this left-wing nuclear bomb aimed at the auto industry has let America down.

So where do we go from here? Lets look back at history. In the 1970’s when the government cracked down on the automobile both in emissions and with CAFÉ standards, what happened? We got smaller, less powerful, less desirable cars that were quite honestly crap we all tried to forget. The American auto industry went through its first wave of losing its prominence. Lives were lost as consumers were forced into smaller cars that did not protect them as well in accidents. All of this in the name of efficiency.

My prediction is that history will repeat itself. Ford , GM and Chrysler will begin to drop high performance cars in the very near future and replace cars like the Mustang with smaller models with four cylinder engines just as they did with the Mustang II in 1974. All the talk of BOSS V8’s, twin turbos and superchargers will go away and MPG will be king.

The resale value of current 2005-2011 Mustangs that were still available with 300, 400, and 500hp will stay high. These cars will begin to be seen as modern day classics that are collected and restored and kept as second vehicles, not unlike the last era of Muscle cars did in the 1980’s.

Our choice as consumers is being taken away. Our choice as enthusiasts is being taken way. Our government in the “Land Of The Free” is acting to tell manufacturers what they can and cannot build, and likely devastating them financially in the process. And in the end the whole catastrophe has been brought about in part by lies and mis-guided notions of anti-capitalist leftist hysteria, junk science soothsaying, and a spineless run to the shadows by those who should have stood up for what is right.

It’s sad really. It is why the saying goes, “You deserve what you voted for”.