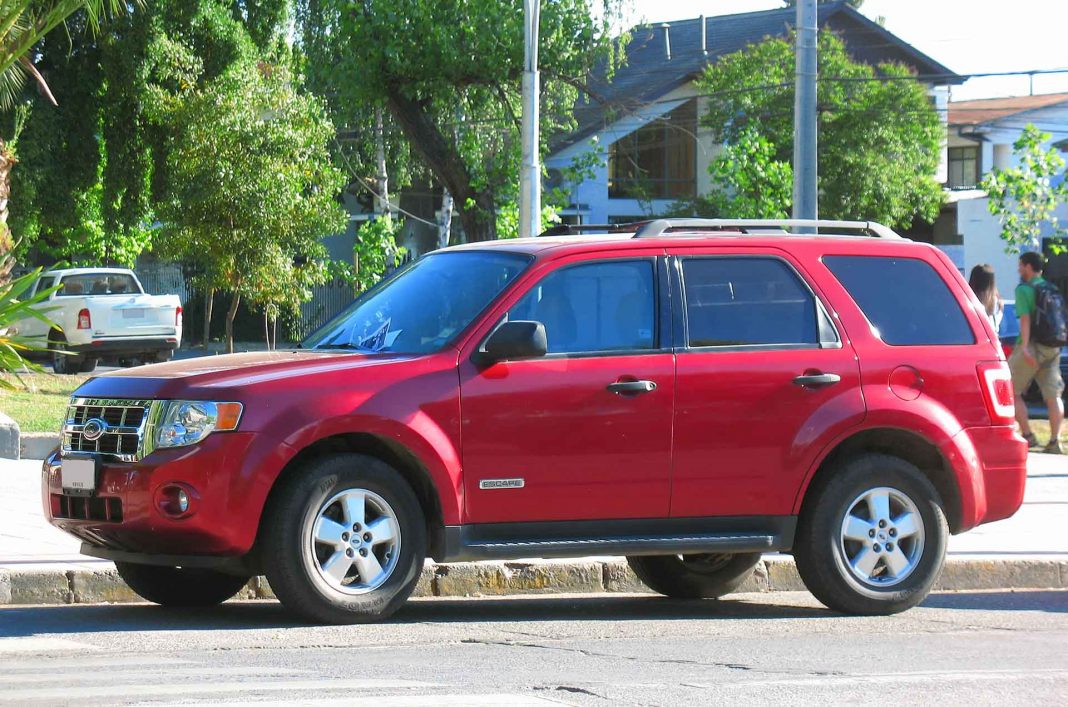 Ford pulled cover on the new redesigned 2008 Escape and Mercury Mariner in the winter of 2006. The new vehicles went on sale this spring, earlier than the traditional fall introduction. A move to jumpstart Ford’s flagging sales, thus far the strategy has worked along with some help from stratospherically high gas prices. The new Ford Escape has significantly boosted sales figures over the 2007 models.

Our 2008 Ford Escape test vehicle was a mid range XLT model equipped with the standard DOHC 16-valve 2.3 liter 153hp four. Mated to the fuel sipping engine was a 4-speed automatic transmission and the optional all-wheel drive system. While the 3.0 liter DOHC V6 with 200hp would be more fun, we felt that testing the four cylinder model would be more representative of what most people will buy.

Believe it or not the power provided by the 2.3 liter four was more than adequate. The engine provided unexpected passing power on the freeway and around town. While we would think a 5-speed auto would be more appropriate given the competition, the 4-speed auto in ours did well to spread the engine’s power out in most circumstances. There are times of course that we had to sink the accelerator aggressively to force a downshift, but for the most part it acted well.

Ford made a number of improvements to make the new Escape more quiet that were well noticed. Even under full throttle acceleration, the engine noise never became thrashy or buzzy. Tire noise only becomes apparent on our grooved concrete freeways around Phoenix. We have to admit it is quieter on the freeway than our long term 2006 Ford Freestyle tester.

The exterior color on our Escape was Tungsten Grey Metallic with a Camel cloth interior. The combination was tastefully upscale. Ford did a good job updating the look of the Escape with a bolder chrome grille and jeweled style headlights. New tail lights with chrome accents as well as new side cladding really do a good job as disguising the near decade old SUV.

The interior was redesigned to address what many had criticized as a low rent district. An all new dash, door panels, console design and seat fabric seek to modernize the interior of the Escape. The switchgear is a step up in tactile quality, sharing many parts bin components with other Fords. The new “poke through” radio and HVAC controls feel good and are easy to understand. The only drawback is that their design prevents owners from installing any kind of aftermarket audio system.

While the interior is more modern, we have to gripe about a few things. Whomever at Ford thought that painted silver plastic dash trim would look good against light colored tan plastic was off track. The design of the dash and patterns of the plastic are definitely more masculine and off-road in their character. The pale colored tans don’t work with it. We recommend you choose a grey interior or black with the Limited model to avoid the cheap look of Tempos and Escorts of yesteryear.

Also there are still interior excecution gaffes, cheap details that spoil the points gained by top quality switchgear. Some parts that dont fit well, gaps are inconsistent, and there are colors and patterns that dont match. Ford has historically been chastised for their cheap interiors and it seems like this will continue until they get their act together like GM is doing. Even entry level brands like Kia are managing some pretty nice interiors these days.

The 2008 Ford Escape has essentially a carry over chassis with exception that 4-wheel disc brakes were eliminated. Now you get only front disc brakes with rear drums. Will anyone care? Probably not. The overall handling and chassis dynamics of the Escape are on par with most small SUV’s. On the gravel roads and dirt trails around our desert oasis we found it to do well provided you don’t get too far off road. On rougher more undulating terrain we found that the suspension bottoms and crashes, sending loud thunks and clunks through the body structure. Stay on the beaten path.

Around town and on the highway the refinement of the Escape is surprisingly good. Steering is light and airy, offering acceptable feedback. Suspension tuning for an SUV is always a compromise somewhere. Because the Escape is essentially a car chassis with a lift kit, it does have a top heavy feel to it when you press the limits.

Unfortunately, the off-road suspension tuning along with the low grip all season tires leaves you feeling exposed in sudden braking or evasive maneuvers. On more than one occasion during our two week stint with the Escape, we found ourselves confronted with howling tires impending lockup when braking suddenly in traffic. While the Escape comes standard with ABS, the top heavy character and low grip rubber take their toll on confidence feedback in traffic.

We logged an average 24 mpg in combined city and highway driving. Not bad for an SUV but not great either. When you consider some people in Chevy Tahoes are achieving low to mid 20‘s you have to ask why not go bigger? Base models with FWD and a 5-speed stick can do better, pushing more like 28 mpg. In fairness, we had the AC on all the time in 110+ degree heat, which can sap fuel economy.

Overall, despite the few areas of complaint, the 2008 Ford Escape is much improved over the previous models. Styling is certainly finding favor with buyers as we see many of the new SUV’s on the road. The top end Limited model offers a larger patch of chrome on the front end, which really looks slick. It will continue to carry the torch as Ford’s small SUV until its replacement comes along sometime in the 2010-2011 timeframe.