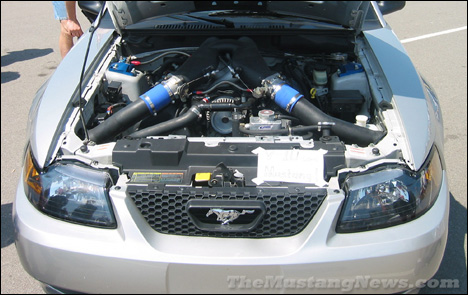 10-14-09: With all good things that have come, there are the good ones that didn’t. As the new Ford 5.0 “Coyote” and the larger 6.2 “Boss” V8 engines are being unveiled the writing is on the wall for the Ford “modular” engine family. The 4.6 and 5.4 litre SOHC and DOHC V8’s will soon be fading into the history books next to the Windsor small-block V8’s, the Clevelands, and the big-block FE’s.

The 6.8 litre SOHC 3-Valve V-10 will soldier on for a short time as it has become a favourite for commercial truck chassis and industrial uses. The V-10 can be found in many gasoline and natural gas powered motor homes, panel vans, shuttles, and Super Duty commercial trucks. You can even find them in some residential and commercial generators too.

This brings us to pay homage to perhaps what might have been the top-dog of the modular engine family had it ever been produced. We are talking about the 4-Valve DOHC V-10 high performance engine. The aluminium block four-valve variant of the V-10 never made it to the showrooms though the high performance gurus within Ford’s SVT “skunk works” sure tried to get it there. This is evidenced by the fact variations of this engine were campaigned in not one, not two, but three concept cars in a three year period between 2003 and 2005.

The first concept car engine was a 590hp punched out 7.0 litre version of the V-10 (shown above) which appeared in the Ford 427 Concept sedan of 2003. The second was a 6.4 liter 605hp version which appeared in the 2004 Ford Shelby Cobra concept, a chunky looking rendition of the classic 427 Cobra. Later the same engine was shown in the 2005 Shelby GR-1 super-car concept.

In addition to the concept cars, the DOHC V-10 had been seen in a Mustang around Dearborn for some time in 2003. The car was no stranger out at the Milan Dragway and was even seen at the Mustang 40th Anniversary Celebration at Nashville, TN. Those I have talked to who drove the V-10 Mustang say it was really a beast to behold. That V-10 Mustang engineering mule gave much speculation to the notion that it might even power America’s favourite pony car. Leading up to the announcement of the 2007 Shelby GT-500, many thought that car might feature the V-10, which it seemed Ford had been branding as the “Shelby” engine with the Ford Shelby Cobra and Ford Shelby GR-1 concept cars.

The 2003 Mustang had its own unique V-10 at 5.8 litres, two more identical cylinders added to a 4.6 DOHC V-8. This differs in architecture from the production 6.8 litre V-10 in the trucks because the 6.8 shares its bore, stroke and higher deck height with the 5.4 litre V-8. The baby V-10 engine’s horsepower came in at only 430 but with a six-speed manual was able to beat a Terminator Cobra to 60-mph by .4 second when Motor Trend got an exclusive opportunity to drive it in September of 2003. The car was said to never exist being the Area 51 of Mustangs that just happened to be known as the BOSS-351.

For the 427 Concept, a special lightweight block with Siamese cylinder walls was designed to accommodate the 95mm punched out bores. The 4-valve heads are said to be Cobra R heads with an extra chamber and set of valves added on. Lightweight forged aluminium pistons, billet H-beam rods, and billet steel common-pin crankshaft made for total engine weight said to be 70lbs lighter than the 5.4 litre DOHC V8 found in the 2000 Cobra R. The later versions of the 6.4 litre engine had more of an eye toward possible production in their underlying engineering and specs but had a pure race-car induction system with open multiple throttle bodies.

The engines had an exotic and unique sound that stands out from the crowd. V-10 engines are naturally difficult to make sound good due to their firing order. Anyone who has driven a Dodge Viper can attest to this. But Ford managed to make the V-10 sound pretty good during the three years of development that went into the engine. With a 600hp baseline one can only imagine what the power output possibilities with supercharging or turbo charging could be. We are talking a good 800-1000hp on pump gas if done well.

Why the engine never made it to production was due to a number of factors including cost, weight, efficiency and all the other real world barriers that keep all of us from driving 1000hp V-16 super-cars that get 50mpg. A DOHC V-10 would have been an expensive niche engine to put into most production cars. The extra size and weight of a production version would have made packaging more difficult as well. If you ask 10 Ford or SVT people why the engine did not make the grade, you will get 10 answers.

Whatever the case, the 5.4 litre V8 with a supercharger won out in the battle of the conference room and has made plenty of performance enthusiasts happy. Now the news is on the street that the next top dog ford performance engine will be a twin-turbo version of the new “Coyote” 5.0 V8, which can put down the same 600hp just as easy as the V-10, but with much better fuel economy. In today’s world, that is the way of the future.

But in the world of those of us who dream about valves, exhaust notes, that punch in your back when you hit the gas, and polishing up our motors at the show, the DOHC V-10 will forever be the one that got away.