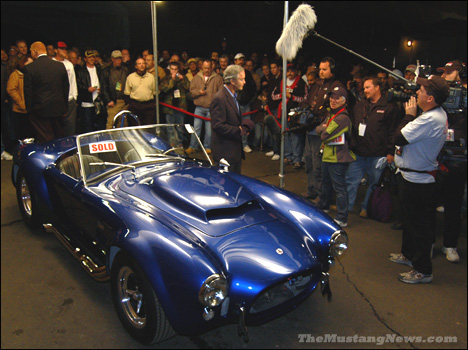 That was the magic number that set a major record for Barrett-Jackson on Saturday night as the 1966 Shelby “Super Snake” Cobra crossed the block. This car was called the “Cobra to end all Cobras” as it’s not only rare, but storied.

It’s number is CSX 3015 and started life as a 1966 Cobra 427 competition roadster which was shipped to England and invoiced to Ford Advanced Vehicles for promotional purposes. After the press car returned to the States, Shelby transformed the car into what he called “Super Snake”

This car is one of only two 427 Cobras that were anointed “Super Snake” status. The other car was CSX 3303 which was sold to comedian Bill Cosby who set the car in fame with his album “200 Miles Per Hour” – a very funny comedy based on his experience with Carroll and the car. Unfortunately that car was destroyed in a tragic accident with it’s second owner Tony Maxey when it careened off a cliff into the Pacific Ocean.

CSX 3015 was driven by Carroll Shelby in a storied sense. He shared on the auction block during the sale that he had taken the car on jaunts across Nevada at 175 miles per hour plus, causing all sorts of mayhem and even hitting a buzzard. “That was a big mess”, he said. In the description of the car in the Barrett-Jackson catalogue it is said that he built the car just to see how fast it would go. With it’s twin supercharged 427 Carroll says that it was a monster that threw belts regularly and even caught fire a couple times.

The car is indeed the “Cobra to end all Cobras” with nearly 1000 horsepower. We can add that the car is now in the stratosphere of automobiles that have sold for millions. The buyer representing an auto collection paid $5,000,000 for the car, $5,500,000 with commission to be exact.

The crowd and supercharged atmosphere in the tent was thunderous. With each cross of a million dollar milestone, the crowd erupted in unbearable cheer and applause. Craig Jackson was hoarse voiced with elated enthusiasm, saying it was a record for their event.

MustangNews
Previous article2009 Lincoln Coupe ?
Next articleWhat does Ford have in store for the 2009 Mustang?