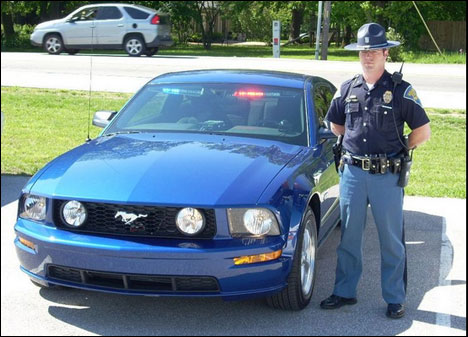 05-24-08: The next time a driver in Indiana is pulled over by flashing lights and sirens, an unexpected vehicle could be in the rear view mirror. The Indiana State Police Department has issued 18 new Mustangs to its fleet. Jason Owen, senior trooper, will be behind the wheel of a 2008 Ford Mustang GT that is designed to blend into normal traffic. “It’s a pretty exciting opportunity,” Owen said. “It’s something I’ve wanted to do for quite a while, and it’s not often that anyone gets to do this.”

The vehicle’s primary use is traffic enforcement, but it will also take on other issues. The driver is required to be in uniform at all times while driving the unmarked car. When Owen began going out in the vehicle Friday, it was designated to those areas the ISP has deemed as high-crash or aggressive-driving areas. Lt. Mike Eslinger said this program is a step toward making the streets safe.

Sgt. Joe Watts said the unmarked vehicle will be a major asset that will help further ISP enforcement of traffic violations. “It’s very plain,” Watts said of the Mustang. “It will blend into traffic very well and people will not give it a second glance. In year’s past when we’ve had this program with Mustangs and Camaros, people pass them and don’t give them a second look, make unsafe starts in front of them or even drag race in front of them. [The Mustang] is a very useful tool that we’re very much proud of.”

The car is laced with blue and red lighting in the upper windshield, back-seat and rear windows. When left unlit, the fixtures are unnoticeable and can easily go undetected by drivers. All electrical equipment is in the middle console, and the rest of the vehicle is exactly the way Ford made it, with no paint or engine modifications. With Mustang’s 300hp 4.6 litre V8, the cruiser will have no trouble doing its job.

Owen said he wouldn’t change a thing on the car. “I wouldn’t have done it any different from what they did,” Owen said. “They put a lot of effort and energy into ensuring that it’s No. 1 safe and No. 2 effective. And I think they hit both of them on the head.”

Owen explained how the Mustang is different from the regular police cruisers, and how they plan to use them. “A lot more nimble, a lot quicker and is not as readily identified as a police vehicle. It’s not to fake or fool anybody, but to be able to get to the problem areas where we are having fatalities, to be able to effectively enforce traffic violations.”

Bottom line, if you live in Indiana don’t go starting trouble with Mustang GT’s unless you really want a surprise.