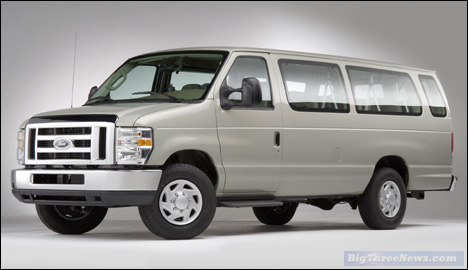 The 2008 E-Series facelift is really an update that serves to bring the Ford truck line into some level of continuity. The new design, inspired by the 2008 Super Duty, features all new sheet metal from the A-pillars forward including hood, fenders, radiator support, grille and bumpers.

“We enlarged the front end of the E-series with a bigger, bolder grille to showcase its strength and reliability,” says Pat Schiavone, Ford truck design director. “We wanted to carry the distinct “Built Ford Tough” look that our truck and sport utility vehicles resemble into these capable vans.”

The larger grille isn’t just a part of that bold statement, it also improves capability by increasing airflow to the powertrain. The grille sits on a sharp, horizontal line that defines the upper portion of the bumper and provides a base for the unique stacked, dual-beam headlamps. Base models come with a sharp, contrasting black bumper, grille and headlamp surrounds, while the high series feature an all-chrome treatment.

“Interestingly, one important thing that many of our customers want to hear about is what’s not changing,” said Rob Stevens, E-Series chief engineer. “The up fitters make up an important segment of our business and have designed their tooling to fit the dimensions of our vehicles. If we change our door openings, all of their tooling becomes outdated. To that point, door structures and floor structure measurements are carryover and seat attachments are in the exact same location.” This truth is self evident as you peruse the interior and remaining exterior of the 2008 E-Series, nothing has changed at all. Ford says the 2008 E-Series line-up rides on an improved chassis. A series of upgrades to the braking, suspension and steering systems have resulted in improvements in ride and handling, braking performance and load carrying capability.

A re-engineered front suspension utilises an all-new geometry and larger sway bars to provide a better stance and firmly plant the front end to the road. New valve technology on the rear shock absorbers further enhances the E-Series ride and handling while upgrades to the steering system provide a better on centre feel and reduced steering efforts, adding to the feeling of confidence.

“E-Series buyers have largely moved commercial in the last couple of decades,” said Brown. “Today, 95 percent of our sales are to commercial or fleet-end users, with about half of those being cargo vans. We’ve tailored our E-Series cargo vans to provide the kind of options these customers look for and deliver them affordably.”

Standard AdvanceTrac with RSC and available traction control among safety items. The Ford E-Series is the only vehicle in its segment to offer standard Advance Trac with Roll Stability Control (RSC) on all E-350 wagons with the 5.4-litre V-8. This industry leading technology is an active stability enhancement system that significantly builds upon existing electronic stability control systems in the market.

Transmission choices include a 4-speed automatic with overdrive mated to the 4.6-litre and 5.4-litre engines in vans and wagons. On cutaways, the 5.4L and 6.8L engines are mated to the 5-speed TorqShift automatic transmission with tow/haul mode.

When properly equipped, the E-150 Van can tow up to 7,500 pounds, the E-150 Wagon up to 7,100 pounds, and the E-350 Super Duty and Super Duty Extended Wagon up to 10,000 pounds each. An available Class II/III/IV Trailer Tow Package includes an electric brake controller with tap-in capability, a seven-pin trailer wiring harness with bumper bracket, and a relay system for backup and running lights.

While we understand the existing E-Series vans sell very well despite their design being decades old, we cant help but to wonder if that would be the case if there were more choices for consumers and businesses. The Mercedes derived Dodge Sprinter commercial vans have been gaining in popularity with their taller cargo holds that allow for standing, their fuel efficient diesel engines, and their extended length versions despite the higher prices.

Ford is recognising the changes in the market however, as it is rumoured that a version of the UK Transit van may be coming to the US market. The smaller and far more fuel efficient vans could provide a whole new set of options for small businesses, courier services, and others who don’t want to feed a big huge V8 powered van.