Behind the scenes build: MMD by Foose Mustang 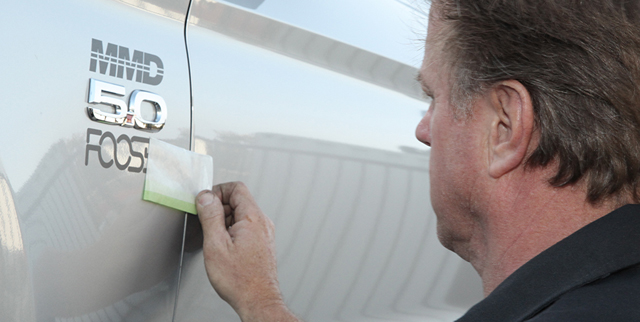 The world was able to first lay eyes on the 2015 MMD by Foose Mustang at the unveiling in Chip Foose’s Huntington Beach, CA studio on May 21st.

The MMD by Foose Mustang was the result of many months of planning and collaboration between the MMD team and Chip Foose himself.

Over the course of three carefully planned out stages, the MMD by Foose Mustang came together with a mix of styling and performance parts.

The 2015 MMD by Foose Mustang utilized a bunch of new MMD by Foose parts to completely alter the look of the S550 body and bring out more of a muscle car feel.

Chip Foose worked to incorporate elements of the original Mustang, giving it a more traditional feel that is rich in heritage.

The MMD by Foose Side Scoops and Quarter Windows are a prime example this, as the inspiration for them was drawn directly from the ‘67/’68 Mustang.

Foose’s strong sense of design helped to bring out the best parts of the new body style of the 2015 Mustang.

In regards to the hood scoop, Chip Foose said, “I love these two lines that come down through the front, and I thought the perfect addition would be to add something in the center and make this hood look a lot more aggressive.”

While the highlight of the MMD by Foose Mustang is the body parts that were constructed and conceived by Chip Foose and the MMD team, the performance parts that back up the build are just as impressive.

One of those parts that garnered a lot of attention was the Bama Performance Supercharger Kit, which is powered by a 2.9L Whipple unit.

With an otherwise stock engine, the Bama Performance Supercharger Kit bumped up the power on the MMD by Foose Mustang to a staggering 810 HP at the crank, which translates to a tire shredding 650 HP at the rear wheels.

With a lot of Foose’s inspiration stemming from classic Mustangs, it was crucial for the 2015 MMD by Foose Mustang to have a proper Mustang exhaust tone. Foose and MMD wanted to provide their Mustang with a deep and aggressive tone, which is why they chose to use Magnaflow’s Competition Catback exhaust. The Magnaflow Catback allowed the MMD by Foose Mustang’s 5.0L engine to roar to life.

When adding a large amount of power to a platform like the S550, it is critical to upgrade other parts of the car as well, such as the driveshaft and axles.

With this in mind, Foose and MMD turned to The Driveshaft Shop for their one-piece carbon fiber

driveshaft as well as their 1,400HP halfshaft axles. With the upgraded driveshaft and axles, the MMD by Foose Mustang is able to do burnout after smokey burnout with no problem at all.

All of Chip Foose’s vehicles are known for their wheels, and the MMD by Foose Mustang is no different. Foose created a custom set of his name brand wheels that are accented with the same orange striping found running down the center of the body. Paired with a set of Vogtland Sport Springs, the MMD by Foose Mustang has the perfect mix of curbside appeal and performance.

After the car was completed it was unveiled at Chip Foose’s studio in California to unanimous praise from the press and enthusiasts.

The unveiling also kicked off the giveaway for the MMD by Foose Mustang, which will be given away at the 2015 AmericanMuscle Car Show in August.

Michael
Previous articleNew Steeda offerings tighten up your 2015 Mustang
Next articleLunacy: California To Issue Green Stickers For All Cars