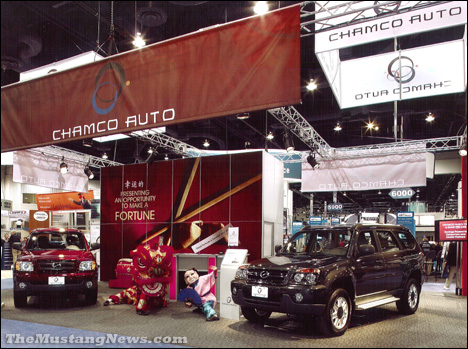 It sounds like a National Enquirer or Globe headline. “Steve Saleen to import cars from China”. But just last month we reported to you that Steve Saleen “retired” from the company he founded over 25 years ago. Story Of course most people in the know will tell you that it was far from being his choice. After he sold his company to private capital group Hancock Park a few years back, he had little to say about anything at the company. In the end Saleen Inc. wasn’t Steve’s to stay at when a divergence of future vision came up.

Steve Saleen and his former right hand man at Saleen Inc., Billy Tally have joined ZX Automobile Company North America (ZXAUTO NA) as CEO and CTO. The company plans to import Chinese made vehicles to America. The importer has an exclusive contract to import pickups and SUVs from China into North America and, shortly thereafter, sedans and crossover vehicles.

Last week, Steve Saleen, Billy Tally, and William Pollack, chairman of CHAMCO Auto, visited China to see the factories of ZXAUTO NA’s manufacturing partners in Baoding and Changchun, China. During the visit, Steve Saleen stated, “I think these vehicles with entry-level pricing are the wave of the future and I am thrilled to have the opportunity to have a hand in that future. I am confident that we will have the cars homologated, in compliance with U.S. standards and in the U.S. by June of 2008.”

The press release from ZXAUTO went on to say that Steve Saleen’s agreement with CHAMCO AUTO will create a new company which will produce a new line of American performance vehicles manufactured in the U.S. for 2008. What those cars will be and from which manufacturer they might be sourced from is anyone’s guess.

Saleen’s vehicles have raced and won numerous sports car Manufacturers’ Championships worldwide. Billy Tally’s association with Steve Saleen began with racing and evolved into the production of street vehicles with the advent of the Saleen S7. Tally has played a lead role with Saleen in the design, development, and implementation of all Saleen Inc. product offerings for both the street and the track.

Steve Saleen and Billy Tally will be designing for CHAMCO AUTO and ZXAUTO NA so that a full and complete line of vehicles will be available to all ZXAUTO NA dealers over the next several years. It will be interesting to see who else from the former Saleen Inc empire will follow Steve and Billy to the new company. Within the last year, Saleen Inc has ejected over 40% of their top level executive staff.

MustangNews
Previous articleWhat does Ford have in store for the 2009 Mustang?
Next articleSmoke ’em if you got em: Muscle cars are dead.